I just ran across an article—maybe excerpts from a vanished article—that suggests that it is colonial to claim Sanskrit as Indo-European. Please note, I may refer to things with rather strong language, but pseudoscience deserves no less. 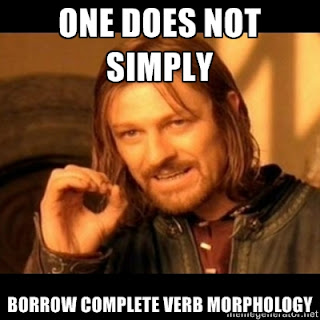 Some further reading (here and here) makes me think that this is some sort of reaction against perceived erroneous history. The gist of it is this: the Brits when colonizing India saw that Sanskrit shared deep similarities to Ancient Greek and Latin. If that is the case then there must be some common language. Since white people—according to the grossly misinformed thought of the time—were superior, and people in India come in a variety of skin colors, then there must have been white invaders who brought Sanskrit to India. Apparently the colonizing Brits couldn't imagine that maybe, just maybe, the initial Indo-European population had skin darker than theirs. Pity their lack of imagination.

The problem with the old notions is that they are junk. This junk in turn, rightfully, raises a horrified reaction among Indians. So far so good. One should be outraged by bullshit pseudoscience. The problem is when one reacts to junk by inventing more junk. The pseudoscience starts off with a howler.

For instance, in Hungary, there is a growing body of scholars who are extremely uncomfortable and dissatisfied with the manner in which Hungarian was excluded from the Indo-European framework.

I feel bad for the Hungarians who want in on the IE, but that's how science goes. It doesn't always come back with the answers you want. Tough. Believe what you like, the science is the science.

there are some Indian language scholars who have suggested that a computerized analysis of Sanskrit and Latin lexicons might yield a far more limited overlap than would be rationally implied by the “Indo-European” classification.

Of the tiny bits I know about  Sanskrit, I know that counting to ten is an awful lot like modern Persian and telling your name is an awful lot like Latin. This is daily use, low rate of change stuff. I also wouldn't expect there to be massive overlap between Latin and Sanskrit—particularly when getting into descriptions of local flora and fauna. This book has a whole chapter about non-IE words borrowed by Sanskrit. Fancy that, a language that borrows words.


…Building primitive lexicons that show similar roots for certain common words can hardly be an adequate basis of linguistic classification.

Actually this is what I'd expect. Quick, say the past tense for see and dive. What were your answers? Saw and dived are the correct answers as of this writing, though dove is making inroads. Highlight the blank if you are curious. One is not being changed, the other is. Care to guess which? If you said that see is maintaining its historic form, you'd be right. Why? Because it's a basic word in heavy use. Dive? Not so much.


Moreover, it [IE theory] has strengthened the now increasingly untenable view that there is no continuity between the Indo-Saraswati Harappan civilization and Vedic civilization, and that India’s languages (both in the oral and written forms) must have been brought to India by more “civilized” outsiders.

The same way that English sprung up in England without any help from continental invaders? While I have no doubt that language displacement can also disrupt cultural transmission, I don't know that language displacement necessarily causes cultural discontinuity. One (cultural discontinuity) has happened without the other (language displacement) in Greece. But I'm not an archaeologist. Until you've got better evidence, stick with what the data tells you. The data, so far as I can see, tells me that there was some sort of linguistic invasion. These things happen, otherwise I might be writing this in a Celtic language.


In this entire body of work stretching, from Sakatayana to Panini, there is virtually nothing to link Sanskrit to any European influence.

No shit. I wouldn't want to put words in Sir William Jones's mouth, but I'd venture to say he didn't know about the connection and was surprised at the similarity too. Oh, why don't I just let him speak for himself.


…yet [Sanskrit] bearing to both of them a stronger affinity, both in the roots of verbs and the forms of grammar, than could possibly have been produced by accident…

I hate it when that happens. I also hate this too.


both Sanskrit and Tamil are syllabic languages and both treat consonants and vowels very similarly.

All languages have syllables and treat consonants and vowels very similarly, when viewed through the lens of being syllabic. Well, except for maybe a pesky example or two in the Caucasus mountains. Nice try though.


From the point of view of classifying languages based on the organizational principles that govern their written scripts no logic would permit the Sanskrit-derived North Indian langauges to be placed in the same language group as the European languages.

Writing systems don't count at all when comparing languages. Just the spoken end. I get the sensation that the author isn't a linguist.


Writing in Language in India (9, Jan, 2002), G. Sankaranarayanan observes how repeating words and forms is a significant feature that extends across the Indian subcontinent and includes not only the Sanskrit and Tamil derivatives but also Munda and languages from the Tibetan-Burmese group.

It's called sprachbund. It happens all over. The interesting part here—to me anyway—is that the Indian sprachbund includes non-related languages. Nothing to see here.


Note too that Indic languages permit the dropping of pronouns (which become implied). …would be impermissable in English.

Dropping pronouns—even obviously assumed content words—is fine by Latin. No one disputes that Latin is IE. Spanish also thinks dropping subject pronouns is fine. Dammit. I hate it when I pick bad examples like English to almost but not quite make my point. Moving along, our pseudoscientist goes on to talk about word order.


In this respect, Indian languages are similar to each other [in regards to a more free word order] but not to less flexible “Indo-European” languages like English. On the other hand, Russian and Czech (like Hungarian) [no cheating, you need to compare IE to IE] do not require a fixed or default word order.

Oops. I think you're hurting your own argument there.


In conclusion, it might be stated that the present scheme of bifurcating Indian langauges into the “Indo-European” and “Dravidian” scheme is unsatisfactory in many ways.


…it has also precluded comprehensive comparitive studies between these Indic languages and other Indic langauges such as the Munda or those from the Tibetan-Burmese stream.

Who is being stopped? These studies might actually be fruitful, but they only count when peer-reviewed.


Sh Thadani [the author, has] a Post-Graduate degree in Computer Science from Yale…

Aha. I was right. Not a linguist. Look, I'm not claiming authority here, but if you're going to write a "research" document it may help to have some formal training in the subject at hand. I don't trust my plumber to fix my car, why does a computer science guy get to look like a linguist?

Anyway. This has put some fire under me to learn Sanskrit. I think I'll put some effort to it over the summer. Well, once I've got True Story read.
Posted by Unknown

You know you want one.

Who wouldn't want the Prince in Italian and English?